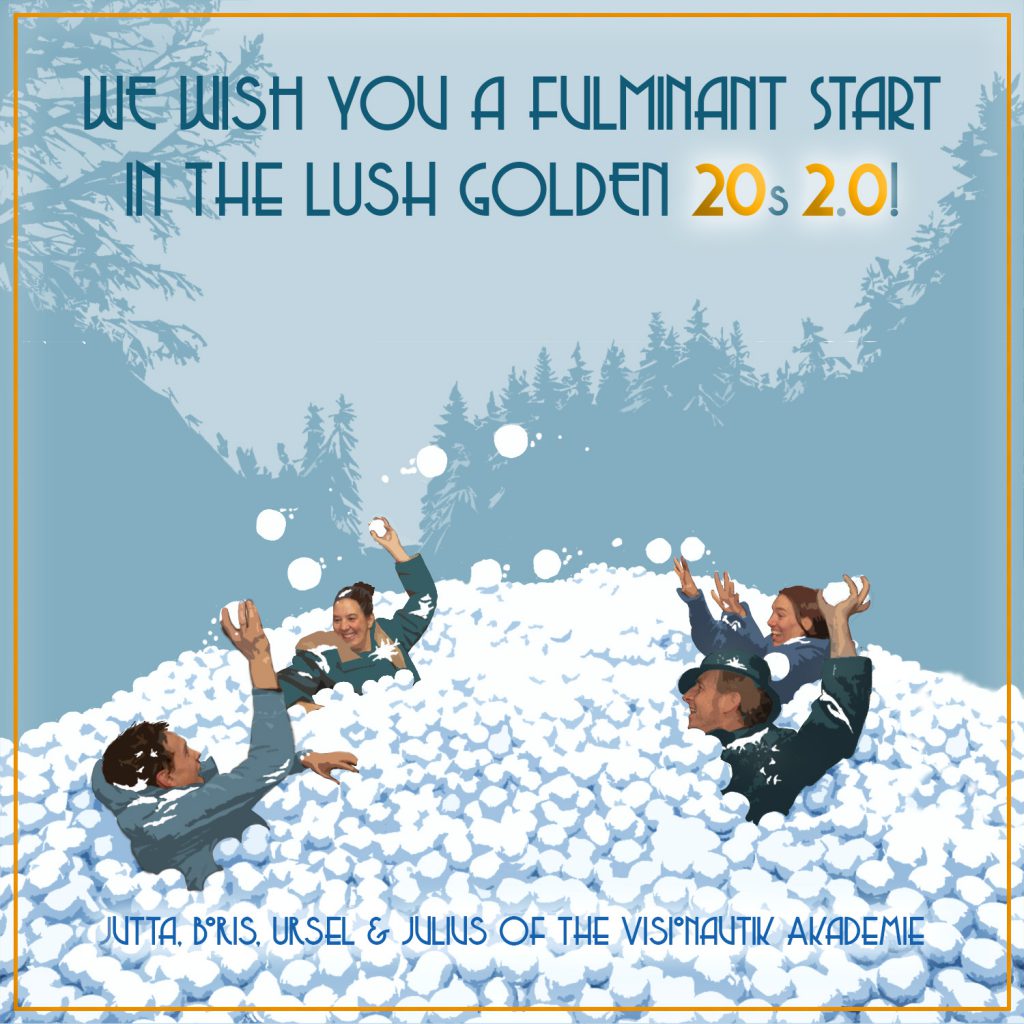 The Golden 20s, wild, exuberant times with new social freedom, economic boom and the heyday of art, culture and science. If we indulge in the thought experiment of creating new Golden 20s a hundred years later, what would they ideally look like? What can stay the way it is? What should revive? What do we want to create?

Let’s take out one aspect of the Golden 20s and take a closer look at it. What could e.g. upturn, wealth and abundance mean today, with an awareness of the limits to the growth of our planet, the question of a fair distribution of resources and a life in dignity for all living beings? A plethora of solutions and ideas is still waiting to be explored, found, tried out and implemented …

And already a multitude of approaches exist worth expanding and thinking ahead. I will feature a few of them here in order to inspire you to commonly create the Golden 20s on a new level.

2.0 means: Away from passive consumption, towards participation and co-creation. Sure, you can just consume wealth for yourself, accumulate more and maximize your own profits. But that’s soo 2019! Abundance 202.0 is interactive and co-creative, it has something to do with sharing, giving, with win-win and taking responsibility for the larger whole.

A culture of generosity – happiness for yourself and others

In this context, I find the impulses for a culture of generosity by Nipun Mehta very interesting. Nipun Mehta supports projects and new thinking in the spirit of a gift culture with his forum called  Servicespace  and he has launched the gift restaurants “Karmakitchen”, which are now available in many places around the globe. 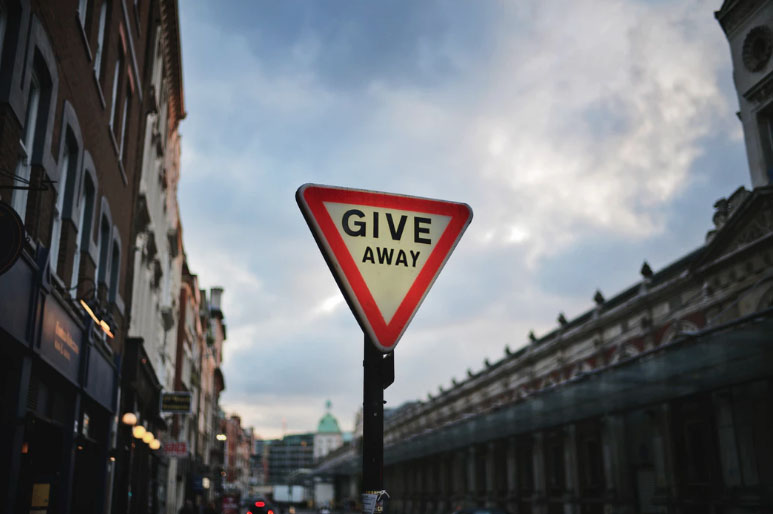 If you want to try it out on a small scale, you can get inspiration from the author and entrepreneur Kurt Tepperwein, who has the habit to share with a stranger something that he has enjoyed very much. If he enjoyed a theater show, he buys another ticket and deposits it for the next one who wants to buy a ticket for this show along with a friendly, anonymous greeting inviting the recipient to pass this gesture on and give someone else a treat.

Impulses of generosity like this not only have the characteristics of spreading happiness, but also make yourself happier, as you can learn from the experiments conducted by Michael Norton, which he describes in the TEDx Talk “How to buy happyness”

In addition, as a valuable side effect, gift giving aligns the subconscious mind with abundance: “I have so plentiful that I can give to others, so I must be rich.” This enhances a personal feeling of prosperity and makes you magnetic for abundance and wealth. This mechanism is very clearly described in the book “Conversations with God” by the author Neale Donald Walsch.

The situation is similar with the focus on gratitude, a basic attitude that is so much more than the “Be nice and say thank you!”, I grew up with and which I used to perceive as an annoying duty of courtesy when I was a child. It was only much later that I became aware of the power of gratitude, which, regardless of the external circumstances, significantly decides whether I feel rich or poor. The interreligious brother David Steindl-Rast  has a lot to say on this topic on his website gratefulness.org , including small practical exercises and games to train the attitude of gratitude.

Framework for fair distribution of resources

When I look at the design of political frameworks and social structures that create abundance instead of poverty, two very powerful approaches cross my mind: First, the Economy for the Common Good, as described by the author, activist and dancer Christian Felber in his book of the same name, with very specific ideas such as the Common Good Balance Sheet, which makes so much sense that I wonder why it has not yet become a natural base of our political-economic decision making practice, taxation etc. 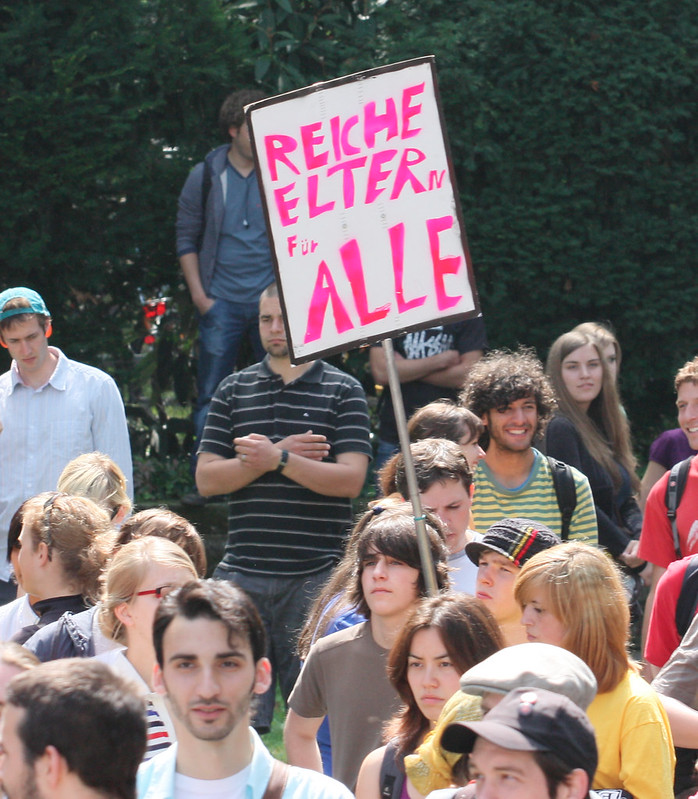 Another exciting approach are the “Commons”. This concept has received a renaissance as creative commons in the form of freely accessible knowledge in the digital space, but which goes far beyond this and which is worth being expanded for many reasons. The author, researcher and activist Silke Helfrich is driving this topic forward significantly, among other things with the book “The Wealth of the Commons”, in which a large number of international authors have their say with the most varied of perspectives and lived projects, and which consequently cannot not only be bought but also downloaded for free.

Using instead of owning

In everyday practice, I am an enthusiastic user of sharing concepts. They are capable of  spreading the paradigm shift from owning to using to the masses, because the added convenience and / or relationship quality and lower costs are argument enough to get away from the idea of private property. The imagination of what you can share with each other seems to know no boundaries, apartments, grandmothers, vocabulary, tools, office desks and workers … There is a great overview of various exchange and sharing platforms here. However, it is still a matter of consumers. The Fraunhofer Institute for Systems and Innovation Research is currently researching to what extent sharing concepts can also be used in industry. There is still a lot of potential to make do with fewer resources in industry in this way.

Savor the abundance – Let’s gild the Twenties together

Once I started to dig in that topic, more and more approaches, links, ideas, future-oriented projects and oases of co-creative and cooperative wealth pop up. The ones I’ve described here are just a tiny part of a world full of ideas – and additionally I have limited myself to the economic aspect of the golden twenties.

What else is important to you that has not yet been brought up here? Where do you see opportunities or even lived practical experience to gild the twenties lying ahead in order to make it rich for all living beings? I’m happy if you share them here as a comment. And I’m happy if you join in with the cocreative design process to turn the coming decade into a particularly valuable one – for yourself and for the world that surrounds you!