Nothing Can Stop Us Anymore

Our millennium is finally of age!

To turn 18 sounds like: to be finally grown up. To be taken seriously by everyone. Finally to be allowed to do everything. To live one’s own life and not the one that one’s parents, teachers, or older siblings prescribe. Being allowed into clubs without a fake ID, seeing “18+” films, voting, and driving are only the tip of the iceberg. It’s about so much more than that: it’s about freedom, about independence. About the feeling that one is unstoppable.

Rarely do I encounter this feeling in most people over 18. Looking closer, I discover that there are still so many more barriers that stand in the way, most of them self-made. These barriers have different names. Sometimes they are called “etiquette,” sometimes “circumstance,” sometimes “experience,” sometimes “let’s look at the whole thing realistically!” And worst of all: I find them in my own head.

I take a step back and ask myself: Am I not unfair to these barriers? I blame them for hindering me, for blocking me, and for keeping me from what’s important to me. Have they not earned more love and attention?

Clearly, they have! A borderless universe means borderless experience. That is the same as no experience, because there would be no distinction, no contrast, no discernible changes. Only through barriers can we build experiences. And who doesn’t want that? Who wants to drift aimlessly in the universe, without noticing that it exists at all? Not I, at any rate.

Every Barrier is Negotiable in an Endless Universe

In connection to the question of boundaries and the lack of boundaries, a thought from the book “Der Stadtschamane” (“Urban Shaman”) about Hawaiian HUNA teaching has fascinated me. In it, the author, Serge Kahili King, speaks of creative barriers. The concept of creative barriers assumes that in the borderless universe, borders and boundaries were purposefully introduced in order to make single experiences, such as hearing, seeing, and feeling, possible. Many of these barriers have long been accepted as given by nearly everyone, and so we experience them as irrefutable, like gravity, for example. In a field in which certain fundamental assumptions are accepted and experienced as valid, it is as good as impossible to consider the possibility of something else, similar to how it feels difficult to go to a party in a bikini, when all other guests are dressed in their evening clothes. And yet - this thought experiment shows that the given barrier is consciously chosen, and therefore also pushable. Here the question for me becomes: Which of the barriers with which we grew up as irrefutable, which we, since human thought, have accepted and established, are still useful to us? Many of them are surely still reasonable, but which ones would we do well for humanity to broaden, tear out, or lay somewhere else?

Which Barriers Do I Want To Support, and Which Do I Deprive of My Thoughtful Energy?

Acknowledging that it is very, very basically intended and at first glance has few practical daily uses. And yet the thought that all borders only exist as long as they are supported by people who believe in them inspires me. It invites me to look very closely at which borders I want to to support with my thoughts, which ones it would be better to withdraw the power of my thought from, and which new borders I possibly even establish.

Hand in Hand with the Mature Millennium

I can hereby see myself as a designer and suddenly the barriers transform from bothersome hindrances into walls that form rooms, or guard rails that show me my way. And then I let the now-18-year-old millennium take my hand and whisper: Come, let the adventure begin! It pokes me with the spirit of discovery, the curiosity and drive of a teenager just come of age. Ok, we also get one or two bruises and boils where barriers do still stand around clumsily. But who does that bother? What counts is the joy of life and the will for creation and the knowledge: Together nothing and no one can stop us! 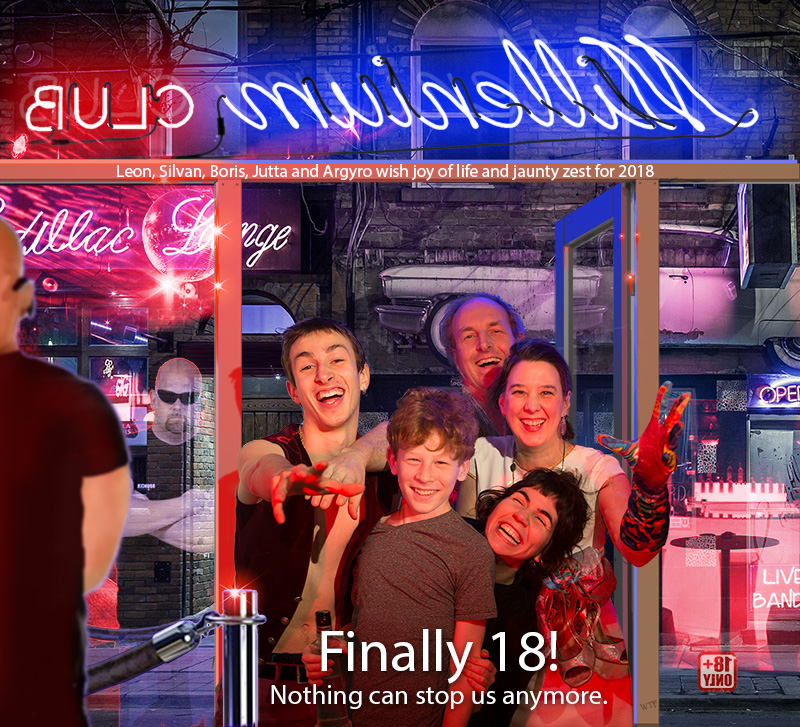